The overall objective of Bikes for Zim is to increase opportunities for Zimbabwean families to earn a livelihood in the short and long term. This is done by using bicycles in various employment project(s). Ultimately, there must be an increase in bicycles for commuting and school traffic in Zimbabwe.

Onze Subdoelstellingen:
Our Sub-objectives:
1. Making bicycles available for:
- Training in bicycle maintenance and repair,
2. Making available the use of bicycles by selected target groups:
- School children,
- Small independent entrepreneurs
- Local bicycle repairers
- Health workers ,
e. Workers and other wage earners for commuting
f. Educators and students in safe bicycle use in traffic
3. Setting up technical workshops for bicycle maintenance and repair
4. Promoting and training in safe bicycle use for adults and school-age children
5. Improving the facilities for cyclists to make cycling safer, more pleasant and more socially acceptable.

Priority criteria have been set up for the target groups of ultimate recipients of the bicycles and requirements are set for the handling and reporting of the donated bicycles.

The objective is also motivated by the observation that there is a wide possibility of acquiring second-hand bicycles and that there is a potential of 'good donors' who will give something for their old bicycle to be useful.

BikesforZim has set itself the goal of using bicycles in Zimbabwe only if new opportunities are also created for the local population. Thanks to BikesforZim's good contacts with local non-profit organizations in Zimbabwe itself, the foundation can see exactly where the need is in the country and a quick and responsible selection can be made of priority bicycle projects, be it for training in maintenance and repair, for entrepreneurship, or to promote bicycle safety. After being awarded these bicycles in the form of a project, their chances for school results, work and income will improve quickly.

Because the foundation is active in both the Netherlands and Zimbabwe, BFZ can guarantee that the money and donations (in the form of bicycles) actually end up with who it belongs.

Self-
sufficient Self-sufficient projects are now number one when it comes to “development aid” in poorer countries. BikesforZim agrees and will not flood Zimbabwe with Cycling without something in return. That is why local projects are so important. There must be a thorough plan from every organization before the first bicycle ends up at such a project. BikesforZim will only support the project if it appears that the plan is self-sufficient, so that the bicycles are used sustainably and long-term employment is created.

The main activity in the Netherlands is acquiring the bicycles and preparing them for shipment to Zimbabwe. Bicycles can be obtained through 'bulk donations' where a large batch is donated directly to the foundation, or by individual donation of a bicycle.

The municipality of Amsterdam is the first major donor of orphaned bicycles. A selection of good orphaned bikes will be set aside until there is enough space to fill a 40-foot container. Orphaned bicycles are those bicycles that have been haphazardly parked in the streets of Amsterdam for extended periods and are a problem for others. Amsterdam, like most cities in the Netherlands, has been forced to create detailed local legislation to curb the problem of the excessive number of bicycles on the street. Illegally parked bicycles are collected by city workers and taken to a central depot where they can be retrieved by the owners (for an administrative fee that does not cover the costs!).

The donated bicycles represent a portion of these unclaimed bicycles that the city labels to support employment projects in the developing world.
Other cities and towns can join this solidarity network and make orphaned bicycles available for shipment.

Business partners, such as bicycle retailers from major manufacturers, can appeal directly to Dutch bicycle buyers and offer them a lower purchase price on the condition that they donate their old bicycle to the foundation.
Volunteer groups can organize a bicycle collection. The foundation can provide sponsor material to make this a success. 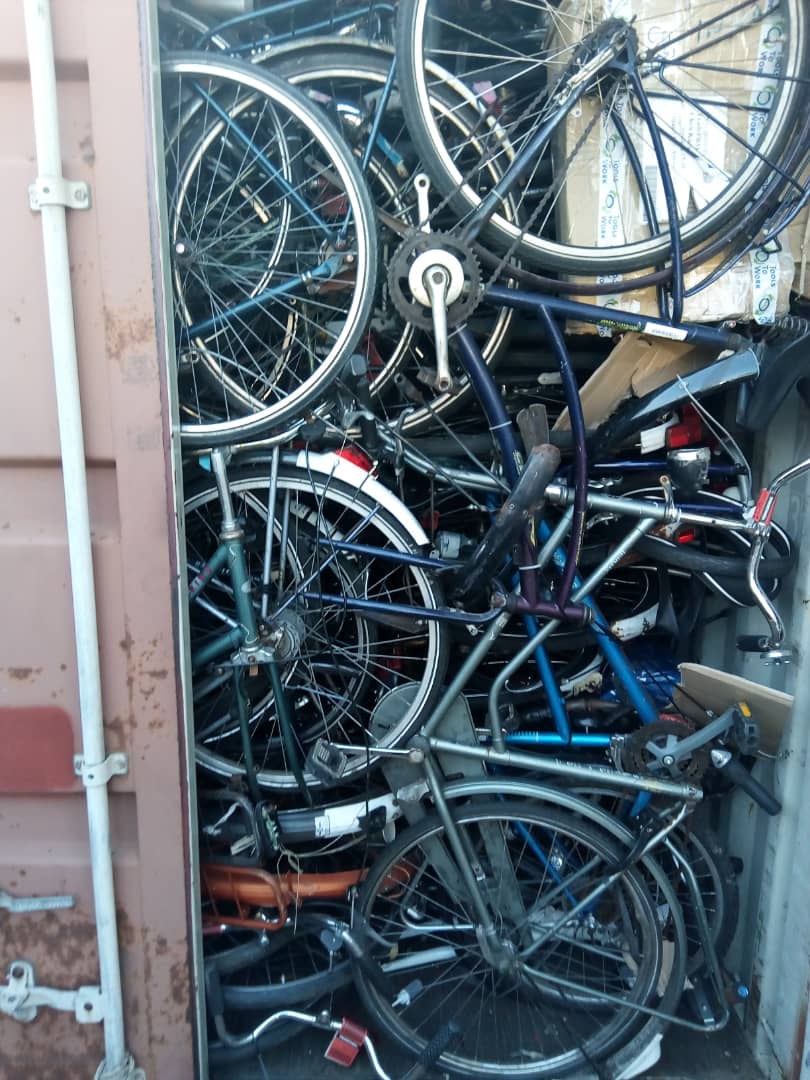 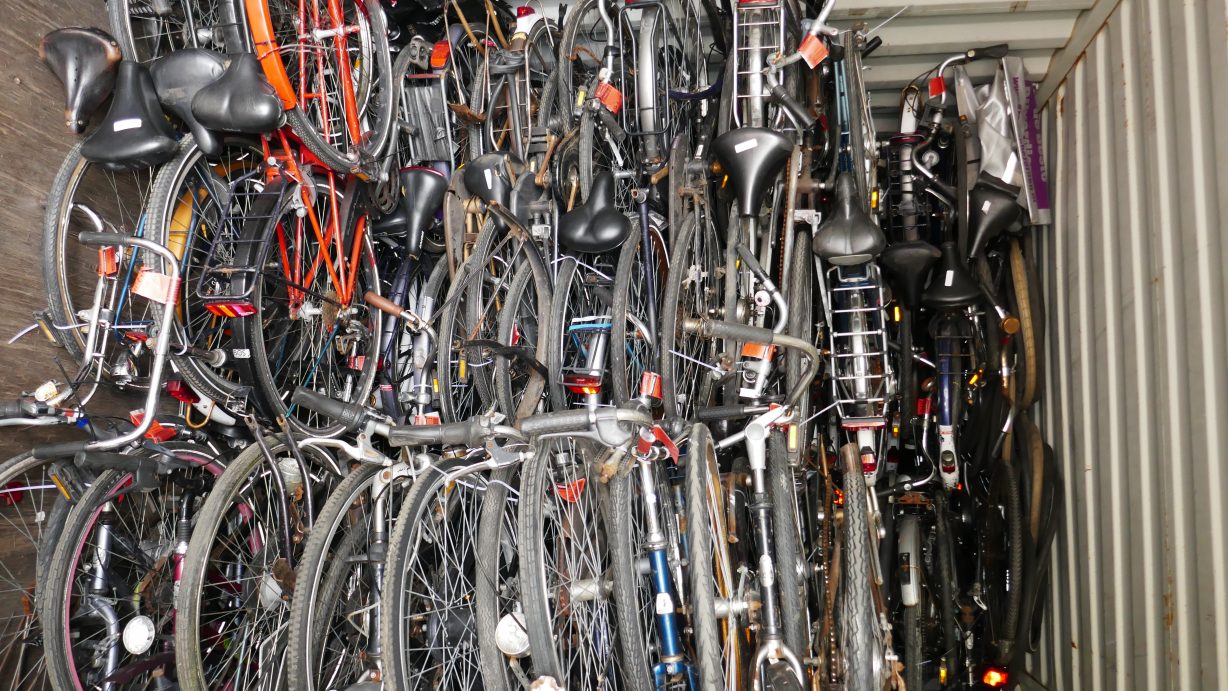 When enough bikes have been collected to fill a 40-foot container, a team of volunteers is asked to get them ready for shipping. This means that the pedals are unscrewed and attached to the frame by means of 'tie wraps', the handlebars are put transversely, the (front) luggage carriers are dismantled, and so on, etc.

Once that is done, loading can begin, where an attempt is then made to get as many bicycles, spare parts and tools into the container as possible. A packing list is drawn up during loading with bicycles that are engraved and provided with a barcode. This should serve the charterer and recipient authorities and can be used to match any individual donors with the recipient at a later date. Ideally, these packing activities are scheduled for days over a weekend to ensure sufficient volunteers.
For the first shipment, a team made available by the Municipality guaranteed the packing and that packing took place during the week.

The containers are shipped to the port of Beira and are brought into Zimbabwe through the Mutare border post. We have an agreement with our partners, the Rotary Dawn club of Harare and the St John Ambulance Association customs authorities, to import the donation tax free.
Our partners in Harare, RESCU and St Johns Ambulance guarantee the safe storage of the bicycles and work closely with FvA in the distribution and granting of donations. Our partners in Zimbabwe have a network of bicycle repair shops.

The Zimbabwean partner “BikesforZim Trust” is responsible for the selection of the people eligible for training and for the organization and final choice of the allocation of the bicycles. They are accountable to FvA in the Netherlands and are audited by them from time to time Zimbabwe has a wide network of individual roadside bicycle suppliers and repairers Our partners will select trainers from among themselves and will assist local NGOs in selecting the person to be trained as bicycle mechanics.

Road safety training and awareness are promoted with the help of other partners. While bicycles are really coveted items in most households, using them on public roads is fraught with danger. Cyclists have to share main roads with often quite inconsiderate car users. Harare's many well-developed cycle paths have been seriously neglected and most of them are now used as footpaths while cyclists have to use the main roads. Many accidents involving cyclists occur at night and only rarely is a cyclist clearly visible at night through effective lighting.

Every bike we ship and pay for comes with:
1. a donor email address (if available),
2. a safe road use leaflet;
3. an LED light for night time use.

Promoting safe bicycle use will be further promoted by advocating the improvement of bicycle paths and facilities for bicycle users in general. To this end, a special program is being launched with the local authorities.

Your contribution helps people help themselves